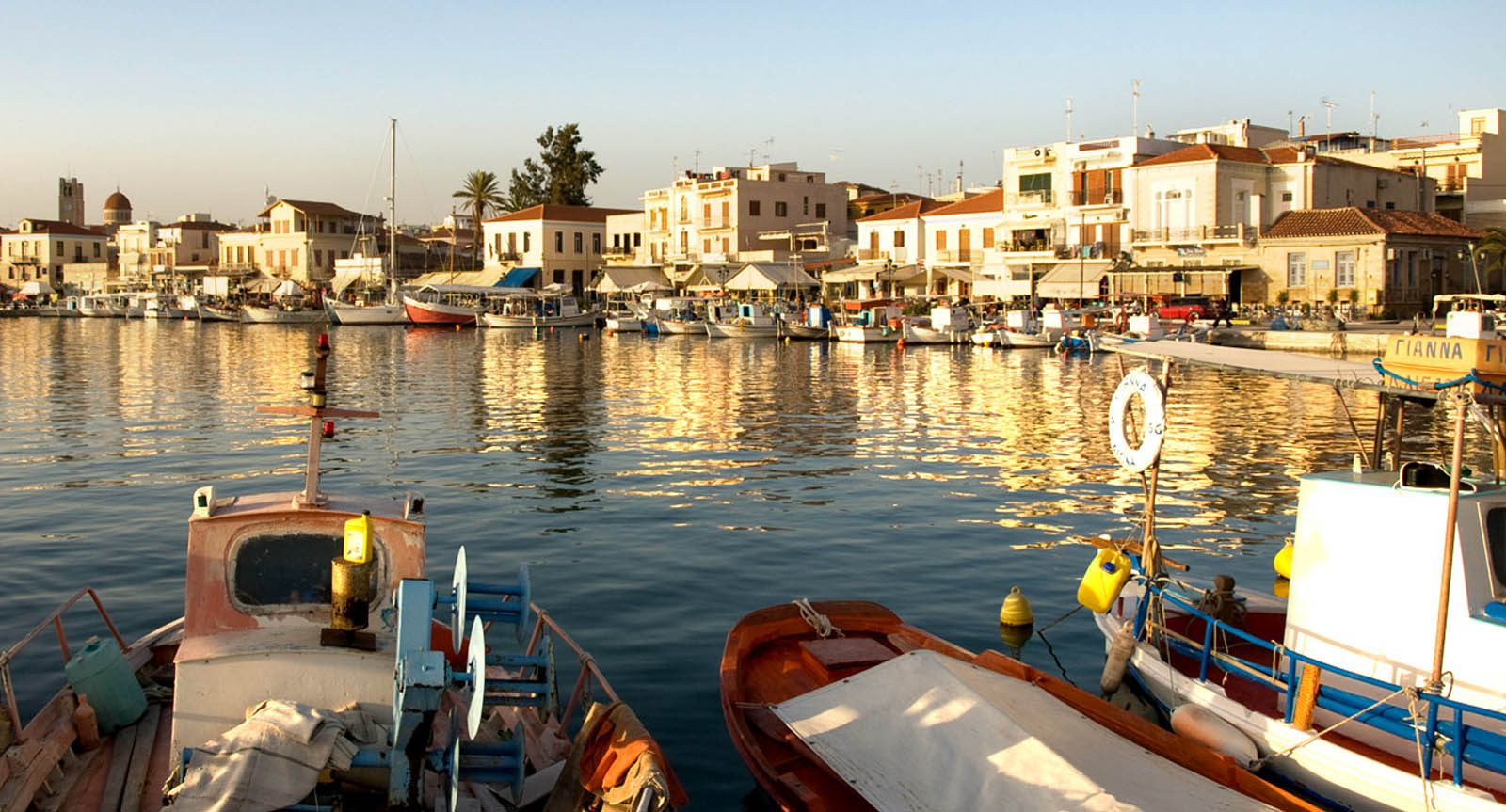 The island of Aegina, in the middle of the Saronic Gulf, has been at the crossroads of cultures and rival actions for many thousands of years - from the mythical Aiakeans to the second world war.

Aegina is like something out of a movie, picturesque houses, winding alleys, horses wearing brightly coloured tassels and pulling carriages, fertile plains, terraced hill-sides of olive trees and aquamarine water. Luckily, the island is large enough to maintain many places of refuge from the crowds and the intrepid explorer will be well rewarded. Despite its small area (83 square kilometres), it offers great variety and has no reason to feel jealous of other "cosmopolitan" islands.

In ancient times, relations between Aegina and Athens were hardly amicable. The little island made up for its size with courage an initiative, resisting Athenian encroachment at every turn. At pan-Hellenic games, Aeginas' sprinters zoomed past their competitors, and the fleet footed came to Aegina to train.

The island produced the first Greek coins - the silver "toirtoises" which subsequently gained great financial leverage throughout the Greek world.

With the onset of the Persian war in 491 BCE, the Aegean's sided first with Xeroxes' army, to the ire of the besieged Athenians. Nonetheless, at Salamis in 480 BCE - the greatest of all sea battles - they returned to the Greek side and won the praise of the Delphic Oracle as the swiftest navy on the seas.

Island life flourished and Aegina's inhabitants built the magnificent Temple of Aphaia within the next 30 years. But they suffered the misfortunes of having taken the wrong side in the Athenian-Spartan clash and were thoroughly tromped by Athens in 459 BCE.

In the early 19th century Aegina was at the centre of the Greek war of independence, becoming the first capital of the new state under Capodistrias (from 1828 to 1829) when the first Mint, Printing Press, Museum and Library of modern Greece were built.

Many artists and intellectuals such as: K. Varnalis, N. Kanztzakis, A. Sicelianos, G. Sepheris, Od. Elytis, G. Geralis, V. Vasileiou, N. Nicolaou, C. Kapralos etc., lived on the island, and found in its beautifull, natural environment the inspiration for their great Works of art.

Now, Aegina is famous for its' pistachio nuts (which are the most tasty), its local fish (catsoules, glanious etc.) but you will also find grapes, olives, figs and almonds in local production. Also the austere clay pottery of the island is an excellent buy.

In Aegina all year round, and especially during the summer many cultural events take place. Local festivals and feast are celebrated and exhibitions, concerts, drama productions and yachting races are held.

And if you are a traveller.... Aegina's ideal location makes it a good starting point for visiting the other islands of the Soronic Gulf.